Very rarely does a genuinely original occult book appear: this work, “The Moonchild of Yesod” (subtitled “A Grimoire of Occult Hyperchemistry, or Typhonian Sex Magick”), is just such a book. With an extraordinary use of language, the author builds on the work of Mme. Blavatsky, Aleister Crowley, and Kenneth Grant to construct a Magickal Mirror that opens a genuine Gateway to Beyond. Covering both practical and theoretical aspects, the eleven chapters are titled Hierophantism,The Mystical Veil, The Outer Garment of the Mind, Elemental Invocation, The Key of Tarot Dynamics, The Metaphysic of the Tarot Keys and the 93 Current, Occult Anatomy, The 50 Gates of Understanding, Hierogamy, The Sexual Ritual of the Sepher Yetzirah and A Sabbatic Sexual Working.

“For the use of the practising occultist and hyperchemist, giving in a compendious form a full description of obscure rites and practices, and a complete explanation of metaphysical matters, hallucinatory vortices, tentacled antheridial gateways toother worlds, the dislocation of the mind, and the deep penetrative insight that arises from these territories, arranged in an entirely novel and interesting manner.”

“Oracular gnosis, is the hypostatic precipitation of phantasma within the non-spatial stellar dimensions of the initiate. Traffick with praeter-human intelligences are received as a concussion of ‘shadow signatures’ which colour (Kalas) the magickal mirror experientially as a Somatonoësis.

Magickally, the crystallisation of this phantasma is a Lunar sexual operation. It occurs within the oneiric womb of Yesod, which receives the praeter-human spermatozoon via the lens of Daäth (The gateway to the ‘Outer Ones’). Within this siderialised amnion, the spectral tinctures undergo a form of hyper-chemistry, whereby the colours (Kalas) out of space arouse a convolvulus within the ‘Astral Light’, manifesting an antheridial embryonate, the Moonchild (Homunculus), which consolidates it’s prescience upon the substrate of the terrestrial sphere. The Moonchild is the vehicle of the Magickal Will i.e. making the word, flesh.

This grimoire is both a Theoretical and Practical exegesis of initiation, sexual magick, qabalah and sorcery. It elucidates the tangential and oblique method, whereby contact with the subtle occult forces are amplified from the deep soundless recesses of non-spatial stellar loci as a physicality (Somatonoësis). Such transmissions are approached indirectly and inferred by the magickal engine of the qabalah, whereby their gateways are represented as tauroid gestalts (Sephira) to the ‘Outer Ones’. Such traffick can be used for mystical or magickal operations depending upon how the practitioner utilises these subtle intrusions (Kalas) of phantasma inspissated within the alembic of the adepts occult anatomy as a Somatonoësis.”

On the Outer, Karl Stone is a discordian episkopos, Bone Setter, Tibetan medical practitioner, occult mycologist, and hyperchemist of the Trans-Himalayan system. He serves as a Hyadean emissary of The Cult of The Yellow Sign. The adepts of this Order are always masked and hidden in plain sight. They receive transmissions from the Hyades, which coalesce through the planes somatonoëtically into that Star Stone, the immortalised star crystal of the astral light, otherwise known as theLapis Exellis (Stone of Lucifer)

Published on Lughnasadh 2012, in a strictly limited edition of 418 copies, this book is beautifully designed to reflect the Golden Age of Victorian publishing, bound in pale blue buckram with silver foil blocking, printed on Favini Alga Carta White 120gsm, and features full-colour illustrations by Stafford Stone (no relation). Each copy is signed and numbered by the author, and comes with a specially designed bookmark. 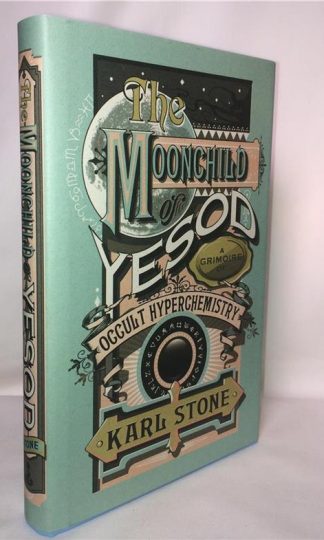 You're viewing: The Moonchild of Yesod by Karl Stone $800.00
Add to cart