Voodoo Fire in Haiti By, Richard A. Loederer. Translated from German by Desmond Ivo Vesey, published in 1935. A nonfiction firsthand account of Voodoo, as seen by Loederer, armed with only his paint brush and machete in the dark jungles of Haiti. A stunning production from the 30s, with incredible woodcuts in an art deco style. An examination of supernatural beliefs by an artist who held a series of art exhibitions using these same, fine illustrations. “This is the most atmospheric book about Haiti, its history, its legends, its superstitions and its native rites and customs ever written.” Voodoo is a religious tradition originating in West Africa, which became prominent in the New World due to the importation of African slaves. West African Vodun is the original form of the religion; Haitian Vodou and Louisiana Voodoo are its descendants in the New World.

“Don’t you realize, monsieur, that many of the workers on the sugar fiends are mere soulless carcasses, brought back to life by magic and now slaving for their master? Several times I have seen the black spirits flying overhead. I swear it; I saw this with my own eyes. No one can escape from the terrible powers of evil.”

“In Port-au-Prince, in Jeremie, in the depths of the jungle, everywhere stood the dread symbol of Voodoo. The first time I saw it was by the Massacre River. A solitary hut stood in a little clearing on the bank and in from the the hut was a pole stuck in the ground with a bleached horse skull on the top. This grisly ornament serves, according to Haitian belief, to ward of the Duppies, evil spirits of the dead.”

“..if you five long enough on this island even you wont’ be able to escape the spirits which inhabit it. They will pursue you until they catch your soul and Possess your body”

Hardcover. 274 pp. 51 Woodcuts Illustrated by the Author. Endpapers are printed green maps of Haiti and portion of Santa Domingo with tiny illustrations. Illustrated profusely by author. orange cloth with ornate flower and leaf embossed border to front left and right, sailboat with waves at middle bottom front, gilt lettering on black background on spine- light soiling and shelfwear to corners and ends. 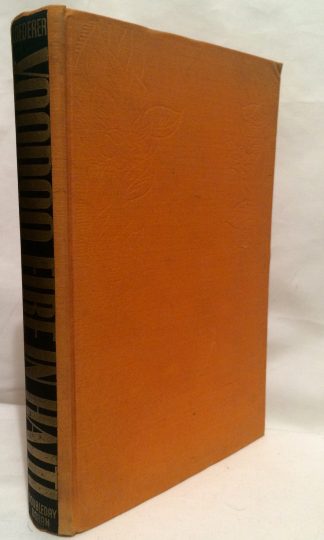