Magic Into Science The Story of Paracelsus by Henry M. Pachter

Magic Into Science The Story of Paracelsus by Henry M. Pachter, published in 1951. “The wonder healer and alchemist of the Renaissance whose feats led to the Faust myth– father of chemotherapy and foreshadower of modern psychiatry– outstanding, colorful figure in the transition from magic into science” “Being the true history of the troubled life, adventures, doctrines, miraculous cures, and prophesies of the most renowned, widely traveled, very learned and pious gentleman, scholar, and most highly experienced and illustrious physicus, the Honorable Philippus Theophrastus Aureolus Bombastus ab Hohenheim, called Paracelsus, doctor of both medicines and professor of theology, also adept of the Holy Cabbala and expert of the alchemical art, friend of the common man and defender of liberty. He cured patients whom ordinary doctors had abandoned for doomed, and he knew wonderful elixirs that restore youth to the old.” Sections Include: The Errant Knight of Science, The Young Alchemist, Controversies of the Sixteenth Century, The Necromancer, On Nymphs, Gnomes, Giants, Incubi and Succubae, The Traveling Adept, The Elixir of Long Life, etc. etc. Bound hardback in original jacket with shelfwear to corners ends. 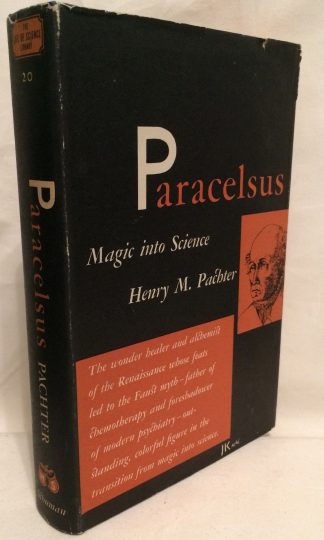 You're viewing: Magic Into Science The Story of Paracelsus by Henry M. Pachter $50.00
Add to cart