Publishers description: Hagen von Tulien, LE BAGGATH-TJNEMOUR, Livre Noir & Livre Rouge (Liber B-T), Society of Esoteric Endeavour (19cm x 15cm x 5cm, 240pp). Hardback in full leather binding. The leather is blocked and inset. To make manifest the natures of the work, there are two versions; one predominantly black with red insets, the other predominantly red with black insets. The endpapers are of Himalayan paper with a doublure panel inset into the pastedown which is made from to layers of pure silk organza. The netlike weaves of these layers create shimmering interference patterns that move as the book is handled, though these is hard to capture with a camera. The also give an impression of depth, that one is looking into the book’s covers. The shimmering is carried on with the edges of the pages which are blocked with a holographic patternThis graphic grimoire is a manifestation of the Saturn Gnosis as taught by Michael Bertiaux who contributes an Introduction and Afterword, the latter being the record of a séance that was intended to secure the voudon passporté that secures access to the realms articulated in the book. The passporté – was then realised through full colour automatic art by Bertiaux – it is reproduced in the back of the book for the use of the reader. As with many mundane passports, the passporté is laminated.The original artwork which forms this grimoire was executed in a variety of techniques including pen and ink, papercuts and digital formats. Its spiritual and symbolic form is designed to enable the deeper realms of the unconscious and its attendant powers to be realised. Twenty five of the talismanic images in the book are manifested in metal, being blocked in silver coloured metallic foil upon a background of pure silk. The silk plaque is then embedded in the page.  It is intended that there should be some slight loss of foil, as the acquire a suitable aged appearance.These books are entirely handmade.The structure of the book is thus:-Introduction, Michael BertiauxLivre NoireHerein are found the mysteries of the Saturn-Gnosis of the Ghuédhé Cultus: its mystical initiations, and its many forms of magic, sorcery and elemental power. Its headings are:-Saturn-Gnosis of Guédhé CultusOne – Serpent SeedThe Esoteric Ritual of Light (from the sacred texts of the Fraternitas Saturni)Two – The Magical Body of LegbhaEmpowerment RitusGeneral Ritual ProcedureThree – Children of the Black GoddessLes HoudeauxLes LinglessouxLes Cadavres PiquantsLes Faiseurs-des-ZombiFour – Guédhé Cultus  of SaturnThe GatewayIn order to make incarnate its nature as the passage from the black to the red aspect of the current, one page has an vesica shaped window cut in it so that a component of the preceding and following page designs can be viewed as part of a different design.Livre RougeDescribes the mysteries of the Stellar-Gnosis of the Me’on Cultus: the stellar stirrings of the unmanifest in an alien realm beyond the conceptions of human consciousness, creating the potential for transmissions from the transyuggothian Outside, from the vast reaches of cosmic beyond. Its headings are:-Stellar Gnosis of Me’on CultusThe Technologies of the SacredBa’al GnosisChoronzon CultThe Elder GodsAppendix IMa Ayon – Dark DoctrineAppendix IISéance – Michael Bertaiux Each copy is uniquely signed and talismanised by Hagen von Tulien by means of a tipped in sheet which is enstamped and each carries a unique hand drawn saturnian spirit signature. This was generated by means of a magical board designed by Michael Bertiaux in combination with the throw of a dice to establish contact with a Saturnian Spirit and obtain its three lettered name. From this name a Magical Kamea and sigil is generated. Thus each book has a unique Saturnian spirit attached.Also each copy has the Society of Esoteric Endeavour bookplate blocked in pure gold. As these books are made to order this bookplate will confirm the final print run and bear a handwritten inscription made by a professional calligrapher which gives the copies number and also to whom it has been issued.

Offered here is a near fine new copy.

There are no reviews yet. 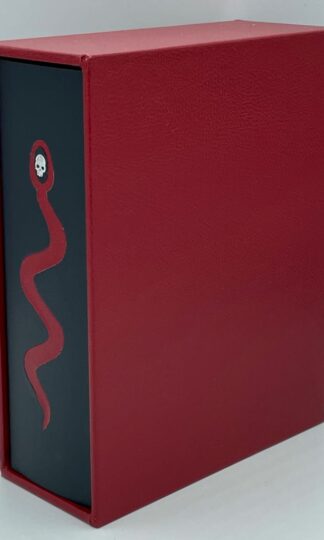