Heathen Religion in Its Popular and Symbolical Development by Rev. Joseph B. Gross

Heathen Religion in Its Popular and Symbolical Development by Rev. Joseph B. Gross, published in 1856. The Topography of Religious Objects Regarded as Deified, The Worship of Gods, Sacred Places and Religious Festivals, The Classification and Relative Antiquity of the Gods, The Oracles Divinations or Auguries and Auruspacy of Heathenism, The Origin and Character of the Heathen Religion, Osiris, Typhon, The Egyptian Theory of the World and the Worship of Sacred Animals or Hiero-Zoolatry, The Cosmogony and Theology of the Hindus, The Religious Creeds of the Scandinavians, The Scandinavian Gods in Their Planetary Relations to Mankind, TheYggdrasil, The Mundane Snake, The World Mountains, The Mithras and Mithra of the Persians, Vesta, Her Fires, The Eleusinian Mysteries, etc. etc. Hardcover with shelfwear to corners and ends and chipping to spine ends. 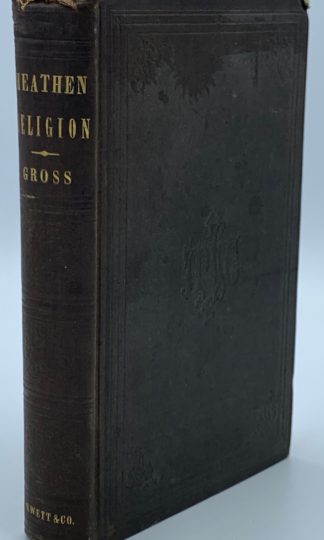 You're viewing: Heathen Religion in Its Popular and Symbolical Development by Rev. Joseph B. Gross $125.00
Add to cart